From MicrobeMS Wiki
Jump to navigation Jump to search

Peak picking is an essential (and the final) step of the spectral pre-processing pipeline. The result of peak picking is a peak table which is attached to the mass spectra. In MicrobeMS peak picking can be started via the find peaks command of the Peak pick pulldown menu (shortcut <ctrl>+P), or by pressing the peak button located in the Peak pick tab. 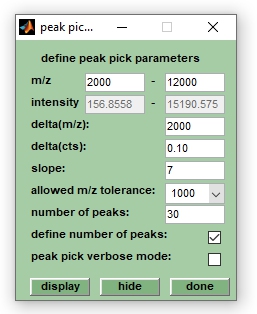 Peak picking in MicrobeMS is always carried out on the basis of original, or pre-processed mass spectra, i.e. the content of existing peak table produced by software packages from other vendors will be ignored. The key idea of peak picking in MicrobeMS is based on two observations. Firstly, it is often convenient to limit the number of peaks per mass spectrum to pre-defined values. Secondly, the analytical sensitivity of MALDI-TOF mass spectrometry is different in different m/z regions: The sensitivity is higher in the low m/z region and lower in the high m/z region. These two observations are addressed with the procedure described next: 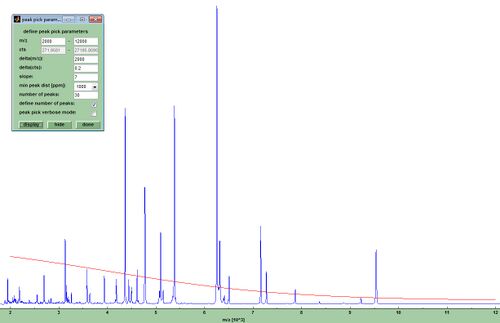 When peak picking has been finished a peak table array containing npeaks rows and four columns is created (npeaks denotes the number of peaks in the table, see below for a description of the peak table content). Peak tables are automatically added to the respective MS spectra and are displayed at the left side of the main window of MicrobeMS in a listbox below the listbox denoted with MicrobeMS spectra ID`s. Note that existing peak tables may be overwritten without warning when creating new peak tables. Computational details of peak picking routine are available from the command line window if the checkbox peak pick verbose mode has been activated.

To produce peak tables from raw mass spectra the following sequence of steps needs to be taken:

Format of the peak tables

When peak picking has been finished, a peak table array containing npeaks rows and four columns is created (npeaks denotes the number of peaks in the table). The peak tables are attached to the spectral data files and contain the following columns: