From MicrobeMS Wiki
Jump to navigation Jump to search 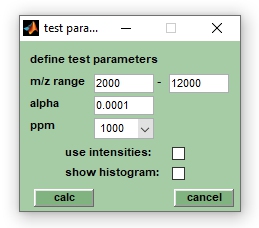 This function performs two-samples t-tests in each segment of the MALDI-TOF mass spectra using peak tables as inputs. t-tests are useful for biomarker screening in ensembles of mass spectra exhibiting certain degree of similarity. A two-samples t-test in a given m/z segment returns a test decision for the null hypothesis H(0) that the peak intensity data in class I and class II come from independent random samples from normal distributions with equal means and variances. The alternative hypothesis H(1) is that the peak intensity data come from populations with unequal means.

Parameter of the two-samples t-test

Output of an univariate t-test

Example of the output from a serial t-test taken from the log file of MicrobeMS: